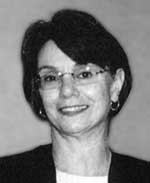 A psychotherapist practicing in the Chicago suburbs, Karen Beyer never intended to be a hero or a public figure. Protecting a client's privacy, however, took her through several trials and ultimately to the Supreme Court and its landmark decision establishing the primacy of patient privacy. Beyer told her story to the members of the American at our Chicago meeting in May after she was awarded the Special Presidential Award for the courageous stand she took in defense of Patient Privacy.

s the stubborn therapist in this case, I'll take partial credit for starting the Jaffee v. Redmond legal battle, but when all is said and done the struggle was won by the American Psychoanalytic Association and similar organizations. The court case was precipitated by the refusal of a licensed clinical social worker and her client, a police officer, to hand over the record of their work together to the attorney who was suing the officer and her employer. The case was won in the U.S. Supreme Court because important members of the therapeutic community spoke in a unani mous voice about the importance of confiden tiality and privilege. The thinking contained in the fourteen amicus curiae briefs submitted by the American Psychoanalytic Association and others was clearly reflected in the Courts landmark decision on confidentiality and privilege.

Behind the Supreme Court decision is a human story of a youthful female police officer who "did things by the book," the mayor who believed in her, the therapist who refused to compromise the policewoman's privilege, and the lawyers who represented them. The mayor made sure the town paid the legal bills, allowing the police officer and the clinical social worker to protect the confidentiality of their therapy records.

To Prevent a Homicide

The story begins on June 21, 199 1. Officer Mary Lu Redmond was the lone police officer called to the scene of an altercation between two men at a suburban apartment complex. The police had been called by Ricky Allen's relatives, who met Redmond as she arrived at the apartments.

Redmond saw two men run out of a building. The second man had a knife in his hand, and he raised it to stab the man in front of him, who was less than an arm's length away. Redmond shouted "Stop, police!" No one responded, so she shot at the second man (Ricky Allen) to prevent a homicide. He fell, mortally wounded and bleeding from an artery in his neck. Redmond called an ambulance while Allen's relatives stared in horror and anger. They had called the police to stop the fight, and now their cousin and brother lay dying. Redmond was white, and Allen was black.

Redmond was extremely traumatized by these events and sought counseling from her employer's internal employee assistance program at the Health and Human Services Department of Village of Hoffman Estates. As director of the department, I decided it would be best if I took on the therapy in this high-profile case.

Mary Lu Redmond and I worked together for almost two years; then a subpoena arrived for the records of our work. Redmond wanted the records kept private. I was in agreement but said I would talk to the judge and attorneys about the facts of the shooting that she had related to me. Her description of the shooting never varied from the scene I described above.

The subpoena was the beginning of the end of our therapeutic relationship, because of the extreme pressure brought upon both of us to reveal the content of the records. I suggested to Redmond that we should work together to find her another therapist. We succeeded, and throughout the trial she had the assistance of a therapist whose identity was unknown to the court officials, the plaintiff's attorney, and the jury who were still focused on the records of the Redmond/Beyer therapy

Officer Redmond's actions were investigated by the Hoffman Estates Police Department and the State of Illinois. Both found that she acted appropriately according to the general orders of her department.

Ricky Allen's mother, Carrie Jaffee, brought a civil rights suit against Officer Redmond and the Village of Hoffman Estates for wrongful death due to excessive use of force. Since it was a civil rights case, it was heard in a federal court in Chicago.

The federal judge soon grew tired of the police officer and therapist who refused to turn over their records. By this time, two different attorneys had advised me to turn over the records, but I refused because of the devastating effect I believed this would have had on Redmond. She was a proud and very private person who had been traumatized by the shooting and the events that followed. Her records contained nothing more than her private struggle to heal.

I was referred to the U.S. Attorney's office by the federal judge, and that office was instructed to consider charges against me, charges that could have led to my incarceration. The U.S. Attorney failed to pursue the charges, but I was not informed of this, and so I believed for some time that I might go to jail.

The federal judge instructed the jury in the case that they could assume that Redmond and I were refusing to reveal information in order to conceal something that might reflect poorly on her. With these instructions, the jury found for the Jaffees.

The case was referred to the Circuit Court of Appeals. The judges applied the balancing theory, which takes into consideration the public's right to know what is in the records vs. an individual's right to privacy. The circuit court judges ruled in this case that the privacy of records of a police officer who sought therapeutic help after a traumatic incident outweighed the need for the public to know the contents of the record to determine her state of mind at the time of the shooting.

I was surprised to learn that the case had been appealed by the iaffees' attomey and was actually accepted by the Supreme Court of the United States. For the first time I was genuinely frightened. My attorney had warned me earlier that if I persisted in refusing to release the records, the case could be appealed and later judgments could go against confidentiality and privilege.

At the time, the states all had laws protecting confidentiality of therapy to greater and lesser degrees, but there was no similar federal legislation. Federal Legislative Rule 501 covers federal treatment of case records, and it says, "Privilege should be governed by common law as may be interpreted by the U.S. Courts ... in light of reason and experience." Common law tradition does not favor the concepts of confidentiality and privilege. But the American Psychoanalytic Association and other groups submitted an unprecedented fourteen briefs (the other side submitted none) in support of confidentiality and privilege to the Supreme Court.

Five years after the shooting, the Supreme Court issued its decision. I was stunned at what the majority stated:

Significant private interests support recognition of a psychotherapist privilege. Effective psychotherapy depends upon an atmosphere of confidence and trust and therefore the mere possibility of disclosure may impede development of the relationship necessary for successful treatment. The privilege also serves the public interest, since the mental health of the Nation's citizenry, no less than its physical health, is a public good of transcendent importance.

When the Supreme Court decision was announced, licensed therapists who had been following the case were relieved. Probably none were more relieved than I. "Forever grateful" best describes my feelings toward the American Psychoanalytic Association for submitting its powerful amicus brief explaining the importance of privilege and confidentiality.

The full text of both opinion and dissent of the Supreme Court are available in the Public Information section of the American Psychoanalytic Association WWW site.